Many of our new public schools look like and possess the feel of a prison. Have you noticed this? We employ architects and then order them to create environments conducive to one primary motivating factor – increasing an ever illusive, ultimately harmful and virtually meaningless test score, the result of which is an ever increasing drop out rate, which happens to be counter productive to the concept. Architects then lose sight of the shore and design virtual prisons for our children.

Architects are not educators. They do the bidding of typically uninformed and highly politicized board members and legislative types, and their products then evolve into a truly ruthless and dogmatic emphasis upon accountability and control and very, very little else.

This is but one example of how technology can take on a life of its own and evolve like a cancerous growth and be suddenly out of our control.

These new prison like structures virtually eliminate or very significantly reduce access to natural light and replace windows (you know, those highly distracting and antiquated structures the older types grew to love) with nothing but banks of florescent lights.

I recently drove past a new large public school and, to my horror, observed classroom windows placed at the very top of the walls, so that children could not possibly see out into the beautiful world of flowers and birds and trees and escaping dreams and other distracting things.

There are a large number of negative health effects that have been linked to working under fluorescent lights that are theorized to be the cause of ignorantly manipulating our body chemistry mechanisms which result in such serious problems as:

Do any of these sound familiar? For more information simply search the internet (your child can show you how. Mine did and, to my embarrassment, suppressed by my amazement, still does).

Annie & Alex Anderson supervise the moving of their new school.

Many years ago, LeVonna and I fell in love with the old Oak Grove Baptist Church Sunday school building (built back in the 1940’s – you know, when they used something called Number 1 Lumber).

The Church was advertising to have it moved and we made a donation to the church and then moved it to our present location. And one of the big reasons we admired it, related to the abundance of natural light, thanks to the numerous (17) large windows that were plentiful in every room. They were placed, as custom

And we are on our way!

would have it, at eye level. I know how many windows because I personally, along with guidance and very hard labor from my dear friend, John Hammons, replaced every of them, since they were all knocked out, to some degree, during the move of the beautiful building from Burleson.

We got a police escort.

You will love this – I announced to my lovely bride that I was going to take my time with this project (restoration of the structure). I was planning to work on it for one whole entire year. Why get in a hurry?

This was not easy.

Dream on! Four years later we opened the school and I took out a life insurance policy on the old dilapidated, worn out body that was now mine. I looked like the old building before we worked on it. Those two large cracked windows on the front were my glasses. The smaller stained glass windows were my teeth. We wound up so broke, and took so much aspirin for our backs, that they named a mountain after us. When we finally finished, I wasn’t sure my heart was still beating, so I pounded on my chest to imitate the sound and keep up my spirit. 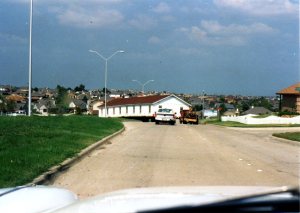 We were located briefly on Chapel Creek.

We started the school with five students and two of them were our own children. I have no idea where the other three came from, but I suspect foul play. My wife did have an occasional funny look about her (it wasn’t exhaustion, I know what that looks like). The only furniture was our dining room table and chairs, which meant odd looks and standing around a lot at home when we ate.

In the beginning we had a great time singing, “Getting to Know You” and wondering who you were. But LeVonna was a great sport. We truly enjoyed everyone we came to know and deeply appreciated the help that was given from so very many friends, relatives and parents. This school would simply not exist without their guidance and help. Our memories of getting this school up and running are truly treasured by us.

Well, seriously, what it all means is this – our society now values test scores more than the emotional and physical well being of our precious children. Governmental entities are making very, very poor decisions in an effort to force educators and children to bend to the will of a philosophy that is devoid of simple logic and any real compassion for children. This is now irreverently referred to as the, “No Child Left Behind” program or “Where In World Did Half Of Them Go?” program (yes, they dropped out).

With its narrow focus upon test scores, it is seen as a dangerous experiment that seriously threatens to disrupt and dilute the education of millions of children, especially gifted children. The Democratic chairman of the Senate education committee, Tom Harkin, says good intentions in the No Child Left Behind law have not translated to good policy.

Even the sacred ground of the learning environments we provide for young and fragile minds are being tragically designed with a gross lack of fundamental understanding and consideration.

Few people in decision making roles are researching the long term impact of what we impulsively do. And virtually no one is giving consideration to looking back in time to what was effective. When it comes to learning give me that, “Old Time Religion”.

When I was a boy, schools in Texas were required to teach about birds and the protection of their nests and eggs and fly the American and Texas Flags and that was it! And I was a truly happy and successful child. My teachers possessed the freedom to teach whatever they felt I needed to know and, more importantly, they were free to love me in the process. And I still feel the warmth of their love today. They did not fear for their jobs, their fear was for my future.

Our beloved Nation became the only superpower in the world because our teachers had the academic freedom to do what they knew needed to be done. Our educators, when they were empowered and trusted to make decisions and teach what they spent years in a university learning to teach, were directly responsible for turning this country into the wealthiest nation on earth, possessing over one half the wealth of the planet and with only six percent of its people.

Freedom, my dear friends, is the reason and it is the only reason we have prevailed and prospered. And it is what we, to our disgrace, removed from the hands of our dedicated and capable teachers. We took freedom away from the very people we need to promote the cause of freedom and enable our children to keep us free! We stopped trusting those who took a vow of poverty so that they could dedicated their lives to teach our kids.

And what is the result? We have reduced the most valuable gifts that God could bestow upon us to an egotistic compulsion for mere numbers on a test, which in a horrible futuristic scenario, translates humanity into another inhumane form of technology.

When will we wake up?

1 thought on “Another inhumane form of technology”